Vegan Cinnamon Donuts are the perfect addition to your breakfast spread….or your dessert!  These melt in your mouth donuts are packed with flavor—bet you can’t eat just one!

As an Amazon Associate I earn from qualifying purchases.

Ah, summer.  Summer is now in full swing.  We are beaching, hiking, biking, and doing our best to keep busy….because the alternative is listening to my wild ones all day long!  These boys need to move!!!  I’ve also been trying to work with them more in the kitchen.  They’ve been choosing recipes from cookbooks, and then each get to help one night a week to prepare our family dinner.  They are loving it!  Last week I received a new cookbook in the mail from my friend and fellow blogger, Mel, of A Virtual Vegan.  The boys chose to make her Drool Worthy Cinnamon Donuts….and let me tell you—they totally live up to their name!  They are so good!  The boys had a blast making them—check out their hilarious antics in the video below—and the end result was pure perfection!  We loved these vegan cinnamon donuts, and so will you!

(For a better look at our renovated kitchen click here!) 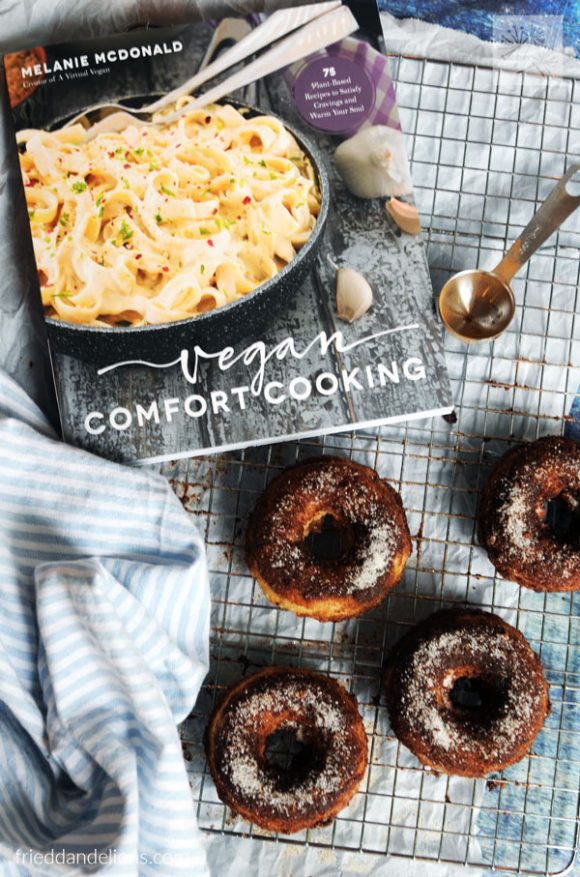 Vegan Comfort Cooking is a brand new, hot of the presses, entirely vegan cookbook written by A Virtual Vegan Blogger Mel McDonald.  As the title suggests, this cookbook is packed full of comfort food classics like bread pudding, potato tacos, and ranch dressing!  There are 75 recipes in the book, filled with full page colored photos.  They layout is really clean, and the book is easy to navigate.  It’s a keeper, for sure! 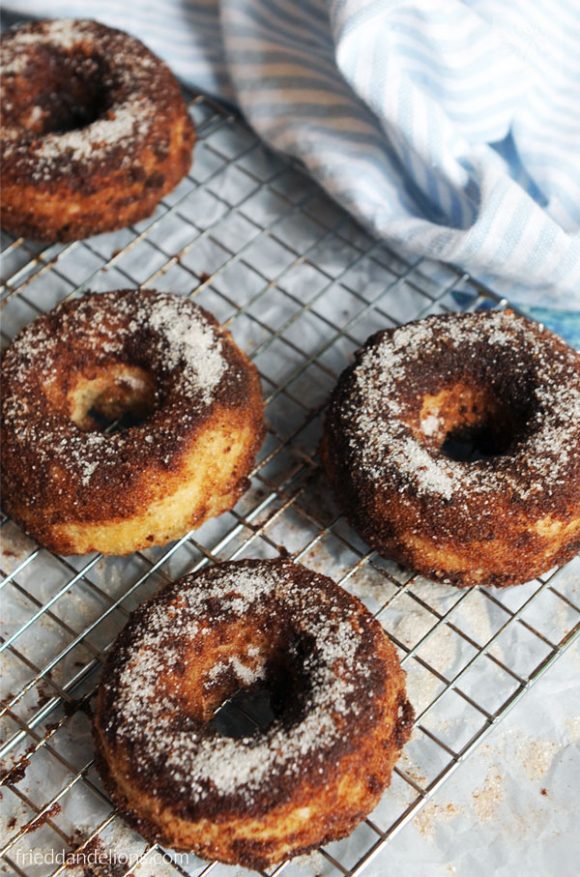 We made Mel’s drool-worthy vegan cinnamon donuts and they 100% live up to their name.  They are so good!  In fact, they are so good that I’m thankful the recipe makes “just” 6 donuts at a time.  If it made a full dozen we would have some serious self control issues.  These vegan donuts have an incredibly light and fluffy cake feel to them.  They’re not heavy at all.  After they bake you dip them in melted vegan butter and then dredge them in a mix of cinnamon sugar.  Or like my dad used to say: CINN-SUG.  Don’t forget to serve these with a cup of coffee! 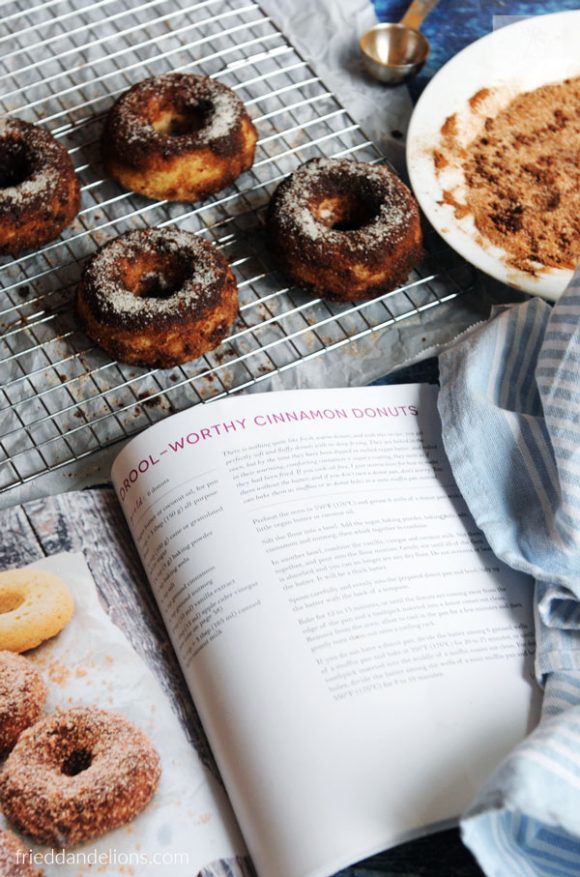 Donuts are really easy to make at home!  All you need is a simple donut pan.  It looks kind of like a muffin pan, but the wells are a bit more shallow, with a “peg” in the middle.  You simply spread the batter into the pan, bake them up, and you have perfect cake donuts in your own kitchen!

I keep company with some really awesome vegan cooks!  Check out some of my other cookbook reviews!

Want to check out more recipes from Vegan Comfort Cooking before committing to the purchase?  Here you go! 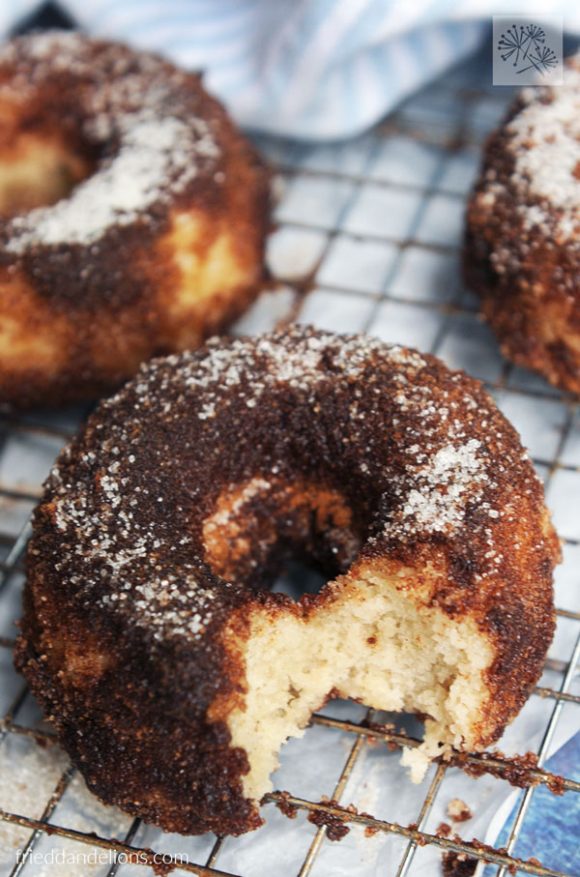 Are you ready to give these vegan Cinnamon Donuts a try?  You’re just a half an hour away from melt in your mouth cinnamon goodness!  Leave me a note in the comments (and a star rating) and let me know how it goes! 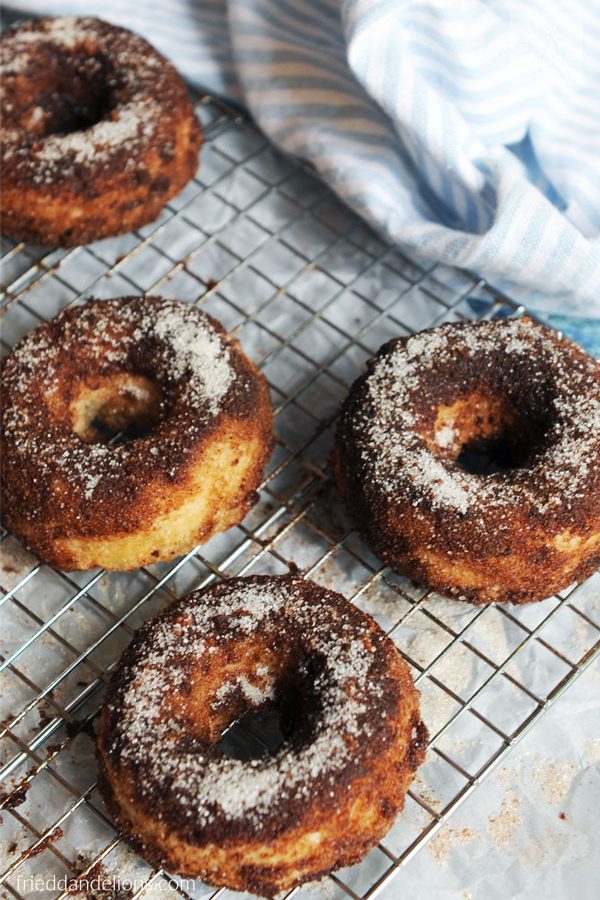 There is nothing quite like fresh, warm donuts, and with this recipe, you get perfectly soft and fluffy donuts with no deep-frying. They are baked in the oven, but by the time they have been dipped in melted vegan butter, and rolled in their warming, comforting cinnamon-y sugary coating, they taste as if they had been fried. If you cook oil-free, I give instructions for how to make them without the butter; and if you don’t own a donut pan, don’t worry. You can bake them as muffins or as donut holes in a mini muffin pan instead.
Prep Time15 mins
Cook Time15 mins
Total Time30 mins
Course: Breakfast
Cuisine: vegan
Keyword: donuts
Servings: 6 donuts
Author: Melanie McDonald

Fried Dandelions Note: When we made these we had more melted butter and sugar than we needed for the coating.  If you want to, you can make about half of the melted butter + coating mixture, and then make more as needed.
Previous Post: « Vegan Texas Sheet Cake
Next Post: Garlic Scape Pesto »

Sign up to receive new blog posts hand delivered to your inbox! PLUS you'll receive a free downloadable kitchen art print when you subscribe!

Welcome to my corner of the internet, where I share family friendly vegan recipes with an allergy safe spin. I'm so glad you're here! END_OF_DOCUMENT_TOKEN_TO_BE_REPLACED

This site contains affiliate links, which means I earn a small commission if you make a purchase through those links. I only recommend brands I personally use and trust. Thanks for supporting Fried Dandelions!

Unauthorized use and/or duplication of this material without express and written permission from this blog’s author and/or owner is strictly prohibited. Excerpts and links may be used, provided that full and clear credit is given to Sarah De la Cruz and Fried Dandelions with appropriate and specific direction to the original content.